F1 Esports: A star is Born, Jarno Opmeer in charge

Powering past his rivals on the way to the flag and instantly become a household name in the sim racing community.

The Dutchman had already recorded a victory in the season-opener in Bahrain before going on to take a podium in Hanoi in Race 2 and now makes it three trips to the rostrum out of three. The standout star of the opening event of the 2020 F1 Esports Pro Series, presented by Aramco, Opmeer now leads the championship by 24 points.

🏆 F1 Esports Race Results 🏆 An insane battle between ourselves and @redbullracingES to close out the race in China!
🏁 P1 – @jarno_opmeer
🏁 P3 – @FormulaDani

💪 We remain top of the table in the Constructor Championship.#F1Esports pic.twitter.com/9UcEJbOrfM

The racing action got underway on Wednesday, with qualifying and race sessions around Sakhir and Hanoi. Under the lights of Bahrain and around the new locale of Vietnam, we saw two winners, with Opmeer taking the first honours.

His Medium-soft strategy – a tactic he would employ in China as well – gave him superior grip in the latter stages of the race, and he was able to move past on track to seal the deal.

David Tonizza was the victor in the second race, but only after a disappointing P20 finish in the first race. A well-timed move for the lead on the final lap to get past poleman Nicolas Longuet was enough for Tonizza to reclaim the top step, as he seeks to defend his title. Check out our full report from Wednesday to get the lowdown on the racing.

Opmeer took pole position at the last moment in qualifying, out-pacing his Alfa Romeo parter in crime Dani Bereznay by mere thousandths of a second. This however did not guarantee the lead into Turn 1; Bereznay was able to power past into the lead, with Marcel Kiefer, David Tonizza and Frede Rasmussen also getting through.

In fact, Opmeer dropped to sixth by the end of Lap 2 as Joni Tormala made his way past too. It was clear that Opmeer’s strategy – starting on the medium tyre and finishing on the soft – was one that paid short term losses for the benefit of long-term gains.

And that manifested itself in a major way in the closing stages, as the Alfa driver was able to surge through with fresh rubber. After emerging from the pits on Lap 14, he got past Lucas Blakeley and Tormala relatively quickly, before setting off after the leading trio.

Kiefer and Bereznay negotiated the lead of the race for much of the running, but as the strategies converged, Opmeer zeroed in. He dispatched Rasmussen on Lap 18/20, with a daring outside move at Turn 3, before surging past team mate Bereznay on the back straight later in the lap.

The race-winning move on Kiefer mirrored this, swooping past the Red Bull man on the penultimate lap to seal arguably the most impressive solo drive in the history of the series.

Ferrari Driver Academy Hublot F1 Esports Team proved their worth in 2019. The Italian team rocked up to their maiden season, and took the drivers’ title with David Tonizza. But their 2020 campaign has been a tougher affair. Though Tonizza and new blood Enzo Bonito scored well in Hanoi, a point-less race in Bahrain was not ideal.

And the pain continued in China. Technical difficulties meant that both drivers disconnected from the session in the early laps of the race, and though their ghost cars continued to tour the Shanghai International Circuit, they were classified P19 and P20.

The Italian team will not shy away from the challenge though. Doubtless, they will be even more motivated to score heavily in the second event, which takes place on November 4-5. 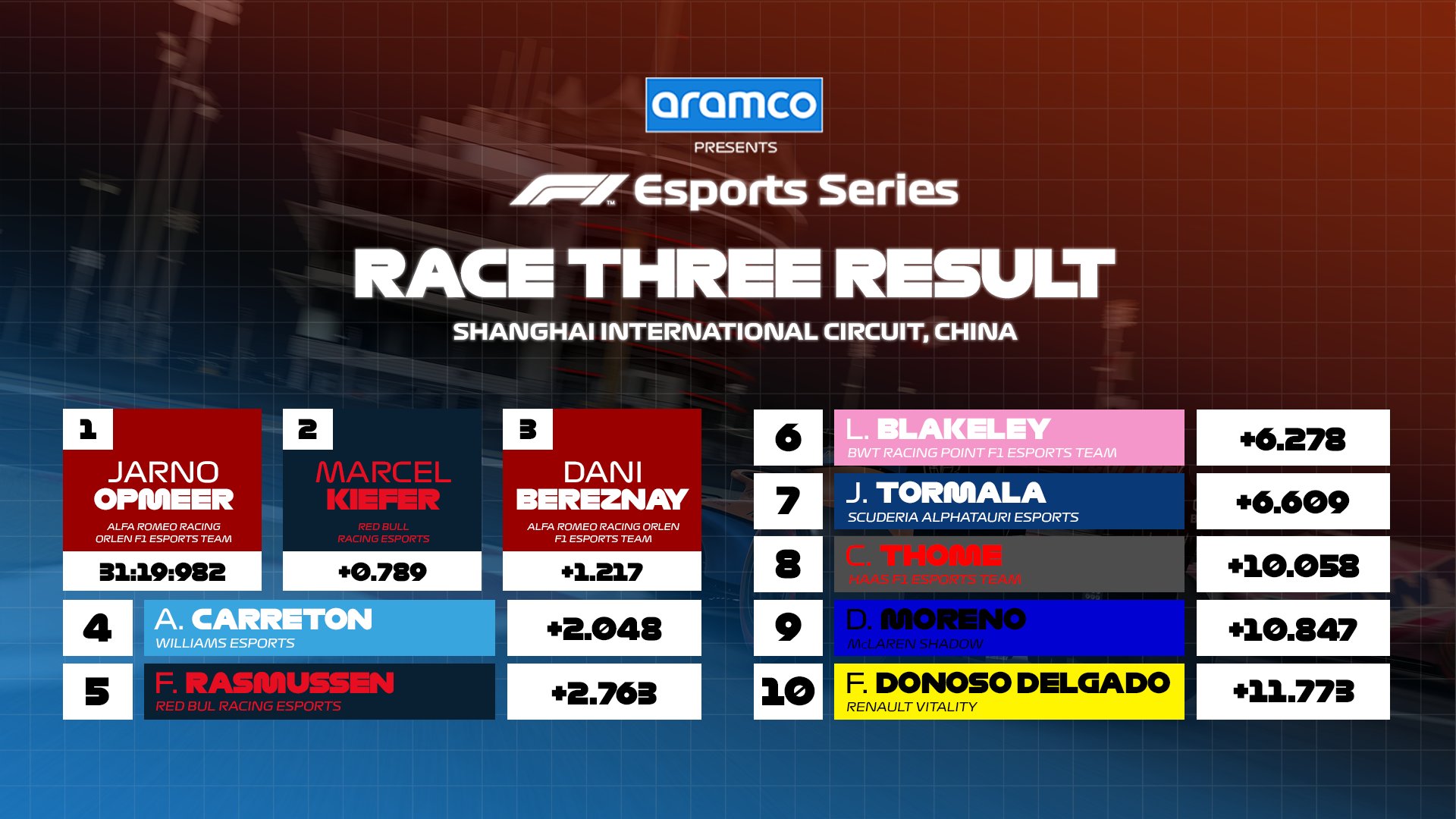 Alfa Romeo are the team to beat, racing towards triple figures with a total of 98 points. Red Bull are a further 29 points back on 69, with Renault Vitality and FDA fighting over third on 33 and 31 respectively.

In the driver standings, Opmeer is well out ahead, towering 24 points ahead of the impressive Kiefer. Their team mates are also in the mix, with Bereznay on 33 and Rasmussen tied with Nicolas Longuet on 31.

Reigning champion Tonizza scores 25 from the opening three races by virtue of his win, with double-champion Brendon Leigh on 18 points. Pro Exhibition unofficial champion Lucas Blakeley rounds out the top 10.

And with that, Event 1 comes to a close. The first three races have shown that somehow, the ultra-tight grid has become even more close-knit, with thousandths separating the best times in qualifying, and some seriously impressive racecraft.

The F1 Esports Pro Series will return shortly though, on November 4-5. We’ll be racing around Circuit Zandvoort in the Netherlands, Red Bull Ring in Austria, ands Circuit Gilles Villeneuve in Canada, providing the perfect accompaniment of modern classics for the calendar. See you then!